A day of high drama on the tough third stage has shaken up the leaderboard of the Berg River Canoe Marathon, ending the challenge of race leaders Graeme Solomon and Hungarian Adrián Boros after Boros withdrew ill, and catapulting KZN youngsters Hamish Lovemore and Tyron Maher into the lead.

After paddling superbly to set up a hefty lead after the second stage, Boros went down with a virus overnight, leaving the powerful Hungarian in a fever and unable to keep down any medication.

He travelled to the start at Bridgetown where he broke the news to his team mate Graeme Solomon, who was forced to withdraw from the team event and continue as an unclassified solo paddler.

That news triggered a wave of frenzied attacks on the fifteen kilometres of flatwater across Misverstand dam at the start of the gruelling 76km third stage as teams sensed the door ajar for a fresh assault on the podium. 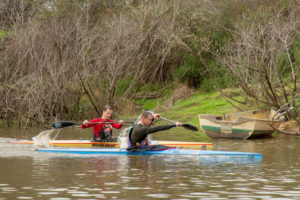 German powerhouse Matthias Schmidt led the breakaway with his Czech team mate Petr Mojžíšek, working together with the Euro Steel duo of Alan Houston and Stew Little to open up a significant lead at the dam wall portage.

Shortly after that the visiting internationals got lost in a dead-end channel with Houston, letting the chasing group that included Gavin White and Ernest van Riet and the Paarl challengers Jermaine Pietersen and Luke Stowman back into the frame.

After the Moravia bridge the relentless pace started to take its toll, and six boats forged a fast-paced advance party that took Lovemore and Maher to the stage victory and consolidated their new position atop the overall General Classification.

It also greatly enhanced the prospects for Houston and Little and the visiting internationals Mojžíšek and Schmidt, shunting both teams two positions up the leaderboard, and posing a real threat to the local veteran crew of Heinrich Schloms and Louw van Riet currently occupying third on the General Classification.

Anders Hart and visiting Kiwi paddler Andrew Mowlem raced well to break into the top ten, while the Capensis Change A Life team of Khumbulani Nzimande and Siyanda Gwamanda gutsed it out to remain in the top ten overall on the demanding long third stage.

Melanie van Niekerk and Richard Allen were the first mixed double team home again, with Tracy Oellerman and Melissa van Rooyen persevering on the long day to stay in contention for the women’s team honours.

The 60km final stage from Zoutkloof to Velddrif gets under way at 7:30am.