McGregor started the Eigevis final stage with more than ninety seconds in the bank over the gallant Under 23 Uli Hart, added the final bridge prize at the Bokkom Bungalows hotspot and then led the fast-paced front bunch into the finish at the Carinus Bridge at the Velddrif lagoon. 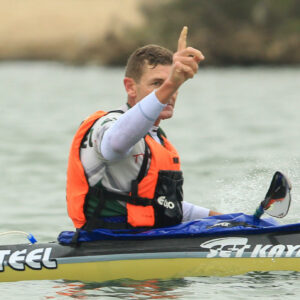 “When I was a kid I never imagined winning a Berg, you always dream big,” said the Team Euro Steel racer from Durban. “To win my first one was something special. I am over the moon to win twelve now.”

“The conditions were really tough today,” he added. “We were into a headwind right from the start and it was freezing cold, and the tide was coming in!

“We had one of the youngest fields assembled, which leaves the race in a very good space going forward. Someone will have to win thirteen titles to take over the King of the Berg title” he said.

The women’s title was wrapped up by Jenna Nisbet, who has been the dominant force in the women’s race through the four days, keeping defending champion Nikki Birkett at bay on a final stage in which she battled to find top form.

“It wasn’t as easy as I thought it was going to be,” said Nisbet, who is using the race as part of her preparations for the world marathon championships in Portugal at the end of September. 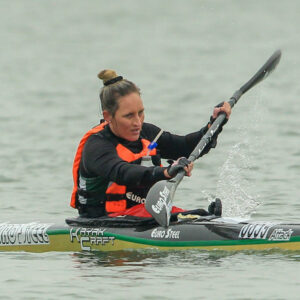 “When I started the body didn’t respond as I had hoped, and it took me a while to get going. I just had to stay with Nikki (Birkett) today and she was so strong and pulled most of the way.

“What was going through my mind was that if I did get dropped she could make up time very easily, so that main goal just not to get dropped.

“I certainly couldn’t have done it without Hank (McGregor),” she added. “He has been absolutely incredible with training and tripping, advice during the race and even lending me his boat!

Nisbet’s sixteen place finish is also a new mark for the best overall result for a female paddler.

After three days of sublime mid-winter weather the early arrival of the cold front made conditions tough for the paddlers over the final 560 kilometre stage from Zoutkloof to Velddrif, with cold weather and a strong headwind combining to create taxing paddling into the incoming tide.

The tough conditions for the final day took it’s toll on the field. Six times winner Robbie Herreveld withdrew early on in the final stage with hypothermia.