On a day of bold moves over 56 kilometres from Delsma Farm to Bridgetown Andy Birkett and his wife Nikki Birkett took control of the Berg River Canoe Marathon’s men’s and women’s race on its extended second stage. 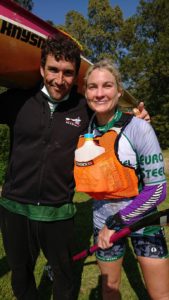 Andy Birkett started the leg side-by-side with eleven-time champion Hank McGregor and Under 23 and Berg team-title defending champion Hamish Lovemore, as the trio stretched away from the rest of the seeded paddlers in a fast-paced surge on the tree-block-lined first half of the stage.

“It was quite a tactical, slow day on the river and when one of the three of us made a mistake the others would go flat out and try to make them pay for it,” said Andy Birkett. “We all had moment when we were behind.”

About five kilometers above the Drie Heuwels weir, roughly an hour from the finish of the stage on Misverstand dam, the trio approached a thick tree block, and Birkett selected a channel down the right while McGregor opted to try and get through the gumtrees on the left, with Lovemore following him.

When they emerged Birkett found that he had a thirty second lead, and saw an opportunity to make a decisive move.

“There were just ten kays to go to the end and I decided to just go for broke and try to hold on to the end,” said Andy Birkett.

Birkett powered to the finish at Bridgetown to bank a handy two minute lead over McGregor, with Lovemore unable to stay with McGregor and finishing third a further three minutes back.

Paarl local Luke Stowman continued his impressive Berg by retaining his fourth place over, with Wayne Jacobs moving up into fifth after storming through the field.

In the women’s race Nikki Birkett started with a hard-earned five minute lead over MyLife Dusi runner-up Jordan Peek, and in the misty first hour she shared the women’s front bunch with Peek and Bianca Beavitt.

Beavitt’s challenge was thwarted by a mishap that cost her over four minutes when she capsized in a deep section of the river where it was difficult to get to the bank to empty her boat and return to the race.

That left Birkett trading places with Peek, who has the advantage of better knowledge of the tricky tree-blocks on the second stage.

“I had to use my fitness and a bit speed to catch up. Then I took a swim and she caught up. It was like that for most of the stage,” said Nikki Birkett.

“I only managed to get away on the flats at the end -that’s my game!” she chuckled.

She added that she had trained hard with her husband Andy for the event, and included gym-work for the first time in her paddling training.

“We have worked so hard for this, and it is exciting to see it coming together for us,” she added.

Peek was pleased with consolidating her second place, trading places regularly with Nikki Birkett, as both made mistakes that cost valuable time.

“I took one channel that just ran dry,”‘ said Peek. “Then one of the lines I had learnt through the trees while tripping didn’t work out because the river level was slightly lower and I had to get out after getting stuck in a tree.

“It was exciting and fun to be ping-ponging with Nikki (Birkett) all day,” she said.

Beavitt raced with determination after her frustrating swim and was able to power home to reclaim her third place from Tracey Oellerman.

The third stage is 75 kilometres from the overnight at Bridgetown to Zoutkloof on Saturday.