The Berg River Canoe Marathon stands in silence today in honour of legend Giel van Deventer, who is missing and is now presumed to have passed away in a paddling tragedy on the Breede River on Saturday. 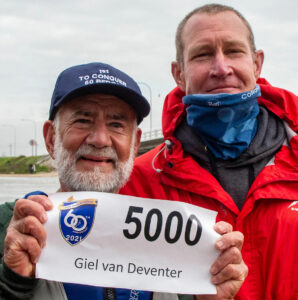 Van Deventer was the first, and only paddler to reach the remarkable milestone of fifty Berg medals, and reached that mark as part of the 60th anniversary celebrations in 2021. He went on to complete the 2022 Berg to extend his record tally of medals to 51.

72 year old Van Deventer was passionate about the Berg and was a popular leader of the Legends batch every year.

His connections built up with the Department of Water Affairs during his career stood many Berg paddlers in good stead, enjoying coordinated water releases in the lower years that made a significant difference to every paddlers race experience.

For many years he was one of the paddlers willing to spend long hours traversing sections of the upper river with a saw in his boat, cutting away tree-blocks and obstructions in the river.

Off the water, his passion for the race combined with his fascination for statistics saw his produce many spreadsheets of statistics, including the definitive record of every single Berg final since the race’s inception in 1962.

Van Deventer’s quick, impish grin masked a tough determination and perseverance. He raced the 1987 Berg four days after a hernia operation and completed the race in pain after repeatedly dealing with hernia complication on each stage of the race.

Even a stroke in his later year’s didn’t deter him, and he adapted his boat choices, paddling style and racing expectations to enable him to continue paddling on the Berg River.

Van Deventer leaves behind a record of 51 Berg finishes, 36 of them consecutive, and a reputation as the ultimate Berg Legend.