The race for the team title at the Berg River Canoe Marathon from 3 to 6 July has been shaken up by news that defending champions Graeme Solomon and his Hungarian partner Adrián Boros have been confirmed for the tough four-day race from Paarl to the West Coast fishing town of Velddrif.

The evergreen Solomon was elated to win the race with Boros last year, making him the oldest victor in the race’s history, and the Team Bamboo Warehouse ace is hungry to revisit the top step of the Berg podium.

“It is on like Donkey Kong!” confirmed Solomon, although the team has still to formally lodge their entry before the close of normal entries at 10pm on Wednesday 19 June.

“After last year’s race we had a brief chat about coming back to try and defend the team title and he said he would be keen, but we left it there. Then earlier this year I sent him a note on Messenger asking if he was keen and he shot back ‘Absolutely’ so we will be back to have another shot at the team title,” said Solomon. 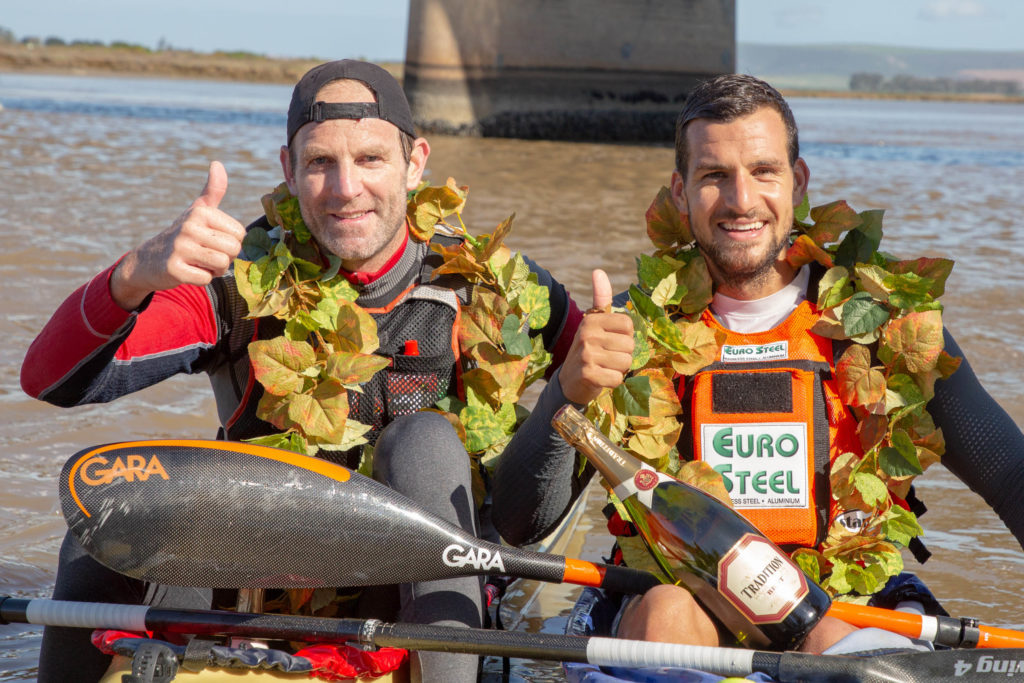 “The team event has totally woken up this race,” he added. “I think we were all learning as we went along last year, but it has been the best thing for the Berg.

“The team dynamic changes the whole race because you are never certain what is going to happen next, as we experienced last year.

“At one stage when we were dicing Keith Moule and Joep van Bakel, Keith took a swim and Joep was frustrated because he had to wait for him, and we thought we would get away. Lo and behold 25 minutes later Adrian got stuck in some trees and we saw a three minute lead just evaporate. The team dynamic makes it so much more exciting for paddlers and those following the race,” he said.

“The team vibe has now caught on, and it is so interesting to see guys now racing and training together as a team,” he added.

“I have a totally new outlook on river racing as I am permanently thinking of a strategy for dealing with channels and tree-blocks based on where I can safely put my partner.

“That’s the awesome thing about the team format. It makes this unique race so much more accessible to elite paddlers who perhaps don’t have enough experience on the Berg. With a seasoned partner you can get any decent marathoners to team up and be competitive, and I think you will see a lot more of that this years and in years to come,” said Solomon.

Solomon has been scanning the paddling landscape to get a read on the likely combinations, and the gathering challenge from a number of very strong Under 23 paddlers.

“We had great water on the weekend (from the Gouda to Bridgetown race) and great weather, which has helped stoke the Berg feeling in the Western Cape. It is really encouraging to see the younger paddlers ready for the challenge,” he added.

Unlike last year when Boros flew into Cape Town on the eve of the race after racing the European Marathon Champs the Hungarian will arrive in the Cape five days before the start of the Berg.

He pointed out that the longer time between the Berg and the World Marathon Championships in China in October made the arduous nature of the 240km Berg less of an issue, especially for the local and elite marathoners targeting the World Champs and the Masters Cup. In fact Solomon debunks that myth quickly.

“Hank McGregor won ten World titles off a base of the Berg, so that has never been an issue,” he points out.

If Solomon were to successfully defend his title he will extend his own record of wins to three, and make him the oldest paddler to ascend the top step of the podium.

“It a horrible record actually!” he admits. “But that’s the team format for you,” he said.