As the Western Cape feels the brunt of a trio of cold fronts this week, bringing more rain to the region, the organisers of the Berg River Canoe Marathon rescheduled to 5 to 8 August feel it plays into the paddlers hands as the river system is fuller now than it has been in many years.

Both major water supply dams in the region, the Berg River Dam and the Threewaterskloof Dam are spilling, and the combined storage capacity in the Western Cape Water Supply System is 95%, compared to 77% a year ago and 62% two years ago.

During the past month heavy rains have swollen the Berg River, leading to it breaking it banks at numerous places on the race route between Paarl and Velddrif, and the river was very full over the weekend that the race was originally planned for early in July. 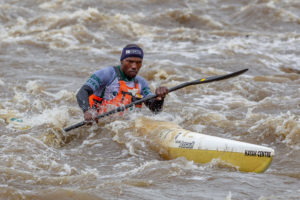 With the country being put into adjusted level 4 lockdown, the organisers of the Berg River Canoe Marathon were forced to postpone the event a month, and the new date in early August looks set to have excellent river conditions for the four stage race to the West Coast.

With the key Berg River Dam above Paarl spilling paddlers can look forward to a full river from the start of the first stage in Paarl on Thursday 5 August, and the full Misverstand dam halfway down the race route will assure good water for the third and fourth legs of the race.

“It has been a tough year for the big field that has entered to be part of the 60th Berg but there are some silver linings to the race being postponed,” said race director Brandon Macleod.

“In general there has been a shift in the rainfall patterns in the Western Cape to later in the winter, and this winter’s exceptional rains bear that out.

“The extra month has also given the paddlers more time to train and get in the mileage that is needed for an enjoyable race, and with the luxury of a full river, the stage is set for a great Berg from 5 to 8 August,” he added.

The race organisers have a variety of plans on standby and will table their final race plans once the national plans for adjusted Covid-19 lockdown are announced on 25 July.

Macleod says that all participants will have to fully comply with the Canoeing South Africa competition protocols and they plan to stage the race in small batches staggered further part than normal to give them the best chance of hosting a safe and enjoyable four day canoe marathon to commemorate the inaugural race in 1962.