Giel van Deventer will be looking to become the first person to complete the Berg River Canoe Marathon fifty times when he sets off at the start of the sixtieth edition of the four-day race on Wednesday 7 July.

Van Deventer’s journey to 49 Berg medals includes many indelible memories, but it took him three years to do his first Berg.

“I entered my first Berg in 1967 but unfortunately I played rugby for the first team at school and we were challenged by the champion Transvaal team and the match clashed with my first Berg,” Van Deventer said. “I chose the rugby match, which we won, but I missed my first Berg.

“The next year I entered again for my first Berg but I was doing my National Service year in the Navy and the ship I was stationed on went on manoeuvres during the Berg week and our leave was cancelled and I again missed it again.

“So my real first Berg happened to be during my first year as a 19 year old Stellenbosch student in 1969.”

The Berg is known as one of the toughest paddling challenges in South Africa with flat water, tough Western Cape winter weather and the sheer distance of the race providing a number of additional difficulties.

For the 71 year-old there are a few races that stand out over the past nearly five decades, and the infamous 1971 second stage that was battered by north-westerly gale force winds and rain still stands out.

“The wind was so strong that we could not pick up your boat to carry it to the start because if you tried to pick it up you got blown away.

“We had to drag our boats to the start. That day only 45% of the starters made it to the finishing line. That makes it probably the toughest day in the history of South African canoe races if 55% of the starters did not finish. 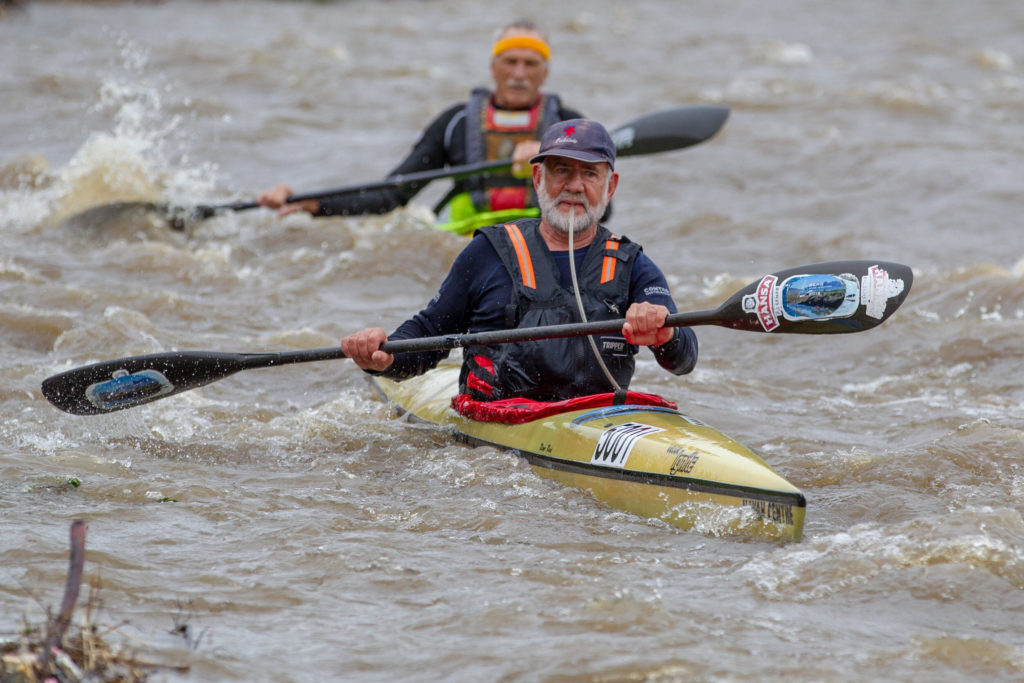 “The second most memorable year was 1987 when I got a hernia injury four days before the Marathon.

“I could only paddle in soft paddle strokes because if I pulled hard on the paddle the hernia popped out and that was an immensely painful process to push the popped-out intestines back.

“Slowly I managed to get to the finish on the first three days but then we faced one of those typical north-western wind storms on the fourth day.

“You could not paddle softly against this howling storm because you would not make any progress. But the hard paddling strokes made the hernia pop out several times. Never in my life did I go through so much pain in one day but I made it and that is what counted.”

With the 2020 edition of the race being cancelled due to the Covid-19 pandemic, Van Deventer had to wait an extra year before his fiftieth attempt. The drive to complete a fiftieth has been quite simple for the legend.

“We used to have a system in Western Province where you could upgrade your racing number to a smaller and more prestigious number.

“The numbers consisted out of one, two or three digit numbers with the smallest number being number one.

“Canoeing South Africa nationalised the whole country’s numbering system and all paddlers got four digit numbers with Western Province getting all the 5000’s with number one in the province changing to 5001 on CSA registration and number two changed to 5002.

“Nobody got number 5000 and the question was who should get it on what criteria? Then WCCU Exco decided that the first paddler who completes 50 Bergs can get number 5000.

“That is when the first seed for a possible 50th Berg was planted. Since then it was a long and hard but pleasant journey to get there.”

Heading into the 2021 edition of the Berg, Van Deventer uses the race as an important gauge of his overall health.

“When I was paddling my 40th Berg Bruce Clarke came passed me and asked why do you do this every year? My answer was it is my annual medical check-up. If I can still conquer a Berg then I know my body is still OK.

“But it is about the camaraderie. Seing old friends again on the river, telling the war stories around the evening camping fires but most of all it is about that precious Berg Marathon medal.

“It is a medal for which you really have to work very hard,” he added.