Durban-based elite racer Jenna Nisbet has shaken the women’s race of the Berg River Canoe Marathon by adding her name to the Early Bird entries for the 240km classic from Paarl to Velddrif from 6 to 9 July. 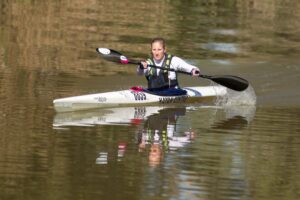 Nisbet made the decision after taking part in the Western Cape Marathon Champs and with her world marathon championships bid her top priority this year feels that the base offered by a competitive Berg is essential.

“When things didn’t work the way I had planned at the marathon trial in Cape Town, I saw that the early bird entries were closing that night and I just felt that I needed another goal to focus on, so I put my entry in.

“I am super excited!” she gushed, “I last raced it in 2016 so it has been a few years since I went down to the Cape to race it. It will be my fourth Berg.”

Nisbet said that she would make the SA Marathon Champs in June, which is the trial for the world championship team, her main focus.

“The Berg is a few weeks after that trial, so I am hoping to use my training from marathons in the Berg and looking forward to the base that Berg will hopefully give me for the remainder of the year,” she added.

It is a view supported by other elite racers, including Hank McGregor and more recently Hamish Lovemore, who are adamant that the foundation laid by a tough Berg in July stands them in good stead for the international marathon season a few months later.

With Melanie van Niekerk and Tracey Oellermann already entered into the women’s race it promises to once again be a key focal point of the annual Berg odyssey.