Hamish Lovemore and Tyron Maher closed out victory in the Berg River Canoe Marathon by winning the final stage of the four-day race, with 19 year old Lovemore becoming the youngest winner of the 58 year old race.

The Durbanites never relinquished their grip over the front bunch that included the pairing of Simon van Gysen and Paul Marais, who wrapped up the second place, and a gutsy charge for the Euro Steel team of Alan Houston and Stew Little which vaulted them from fourth place onto the podium. 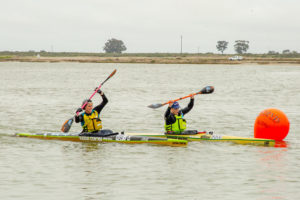 Maher and Lovemore, who was battling with stomach problems on the final stage, managed the pace at the front of the race well, initially breaking away with Houston and Little, but they were then content to let Simon Van Gysen and Paul Marais rejoin the front bunch for the final sector into the fishing town of Velddrif.

“We were a little bit nervous coming into today,” admitted Maher. “We are relieved and excited to have won a race of this stature.”

“The last three years paddling with the MacSquad in Durban have been awesome and coach Lee McGregor has helped take my paddling to a whole new level,” he added.

Lovemore, who was thrilled to have his brother and family members arrive in time to witness the final day of the race, said that they had enjoyed the added excitement of the race for last step on the podium.

“Stew (Little) is my roommate and they spoke to us before the race about trying to make it onto the podium, and they got it!”

The crowd warmed to the courage of Czech paddler Petr Mojžíšek, who also fell ill with stomach problems on the night before the final stage, but when the local paddling community rallied around him and supplied him with medicine to manage the problem, he persevered and helped his German partner Matthias Schmidt to fourth place.

Heinrich Schloms and Louw Van Riet couldn’t hold onto their overnight third and finished the race in fifth position. 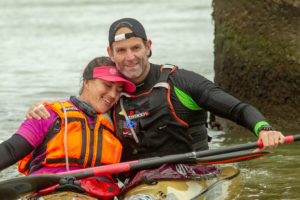 The solo paddlers race enjoyed much of the limelight as Evan Knight took the line-honours in twelfth position overall, ahead of Bianca Beavitt, who was also the first female paddler home.

The Capensis Change A Life team of Khumbulani Nzimande and Siyanda Gwamanda rounded out the top ten.

Behind them Giel van Deventer finished his 49th Berg, and the evergreen Jannie Malherbe, who was part of the first Berg in 1962 and won it on three occasions, completed his 47th Berg in the year he turns 80.