Eleven-times champion Hank McGregor took control of the 61st edition of the Berg River Canoe Marathon in sublime conditions over the new extended first stage course on Wednesday, while fellow Durbanite Jenna Nisbet stamped her authority on the women’s race.

Starting from the new start at Val de Vie, which added seven kilometres of technical flowing river to the first stage, McGregor exerted his legendary tactical control to set up the stage win, and banked both of the days hot spot bridge prizes.

The 44 year-old Team Euro Steel ace was clinical in his vice-like control of a four boat bunch that quickly established itself at the front of the race, with his Durban training partner Wayne Jacobs, young Capetonian Uli Hart and the seasoned tough man of the Berg Simon van Gysen.

By winning both of the new bridge prizes McGregor banked the critical time incentives that earn him thirty seconds off his stage time for each of the bridge prizes he won, with the second and third paddlers getting twenty and ten seconds off their stage times respectively.

“It was probably one of the best Day One stages in terms of water levels and weather conditions. No wind. Sunshine. It was like the Western Cape was showing off,” said McGregor after banking his 37th Berg stage win. 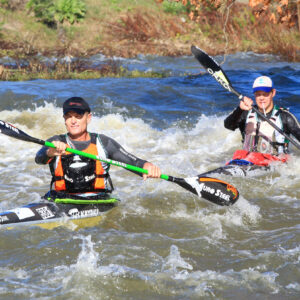 “The first ten kays after the start was like one long rollercoaster,” said McGregor. “It was super fast and narrow and if you made a mistake you paid for it.

“The new hotspots playing for time became really important and really mixed it up for everyone, and they were all going for it,” he added.

“I am really stoked to have had a good Day One, paddling with some really great guys. My good mate Wayne Jacobs came off the back of the bunch just after Hermon but it is a big stage tomorrow.

“It is Uli Hart’s first Berg, and wonder-boy Simon van Gysen is still in it,” he added. “We are in for a big Day Two tomorrow.”

Uli Hart remained composed in the unfamiliar surroundings of the front bunch on his maiden Berg and claimed the second place overnight, with the veteran Van Gysen delighted to finish third ahead of Jacobs.

After struggling to marshall a cumbersome chasing bunch Graeme Solomon headed off alone to try and bridge onto the front bunch, and spent much of the 60km stage paddling alone.

Former winner Robbie Herreveld, who won six back-to-back Berg titles in the nineties, marked his return to the Berg with an excellent first stage, finishing sixth ahead of a gaggle of hungry young paddlers.

In the technical tight channels in the new section of river above Paarl Birkett was caught on the outside of a tight channel and bumped a tree stump, capsizing and costing her critical time as she emptied her boat.

Nisbet seized the opportunity with both hands to take early control of the race, and comfortably won both of the women’s hotspots. 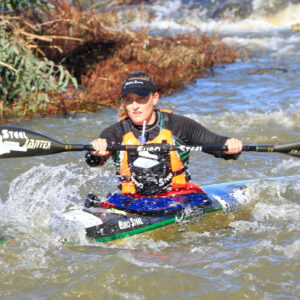 “In decided to go right from the beginning so it became a very lonely day as I was on my own,” said Nisbet.

“I felt really good on the stage. I tapped off at the end because I know that it is a long race still.”

Birkett kept her cool and fell back on her favoured grind to come past Van Niekerk and eat into Nisbet’s lead through the opening stage that ended at Delsma Farm, setting up the women’s race for a fascinating duel through the trees to the headwaters of Misverstand dam on Thursday.