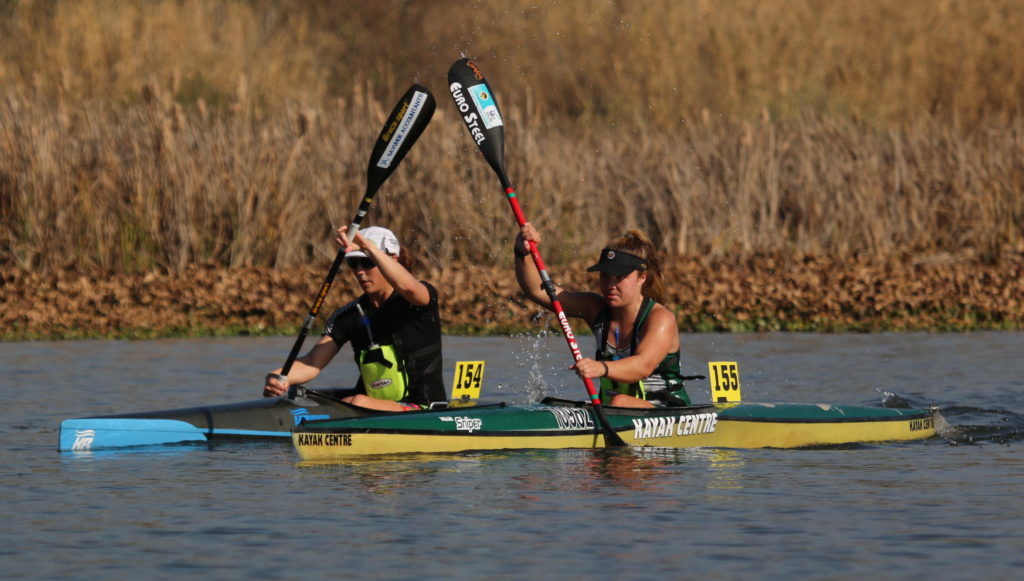 Determined to prove a point, 19 year old Maties student Tracey Oellerman has set her sights on completing her first Berg River Canoe Marathon from 3 to 6 July, and has convinced her former maths teacher Melissa Van Rooyen to join her in the first ever entry by an all-women’s team into the four day race.

As an Epworth schoolgirl she carved out a name for herself at races such as the N3TC Drak Challenge and the FNB Dusi, where she raced into the top five earlier this year, but she admits that the idea of racing the 240km Berg is an intimidating one for many women.

“It is such a big name race in canoeing,” she says. “The sheer distance is scary and it is so different to the sorts of rivers that many of us are used to.”

However as a Stellenbosch student she has been paddling with the likes of Alan Houston and Evan Knight, both committed Berg paddlers, and was drawn to the challenge of the Berg.

“Initially I was going to ask Christie Mackenzie to partner me, but she is fully focused on her marathons after making the SA team for the world champs in China later in the year,” said Oellerman.

At the SA Marathon Champs in Gauteng she connected with Van Rooyen, who was her maths teacher at Epworth, and a competitive Masters age group marathoner.

“We decided to race the senior women’s race together just to see how we go together, riding each other’s wave, and it went well. So we decided to enter as a team!” she enthused.

“Melissa is so strong and she is good at flatwater marathons. My river skills are good so hopefully we can help each other,” said Oellerman.

“I have done some tripping with the guys, and have got to know the technical section at the end of the second day, so hopefully I can look after Melissa on that bit of the race.”

Oellerman, one of the youngest members of the Euro Steel team, also sees the challenge as a chance to prove a point about women taking part in the tough ultra-marathon.

“I find it strange that there aren’t more women doing the Berg. I know as a KZN junior we were all scared of the distance. It is a seriously big challenge.

“But then I see so few women actually entering the race, and with the new team race there are no other women’s teams entered, so I see this as a challenge and chance to prove a point,” she said.

Now all she has to do in the fortnight before the start at Market Street Bridge is shake off the flu she picked up at the SA Champs in Gauteng and get in the last few long distance sessions to settle her nerves before the start of the longest race of her life.

Normal entries have closed, and late entries are now being taken.