Riding a one hundred cubic metre per second bullet of floodwater, overnight leaders and defending champions Graeme Solomon and Hungarian Adrián Boros extended their lead in the Berg River Canoe Marathon with a faultless display over the 48km second stage.

With the overnight stop at Zonquasdrift flooded by the overnight arrival of the floodwaters, Solomon and Boros set off with a seventy second lead in the bank over the charging youngsters Hamish Lovemore and Tyron Maher going into the king-maker stage.

“It was a bit worrying because the water-level had come up again overnight and we just didn’t know where that bubble of water would start and finish,” said Solomon. 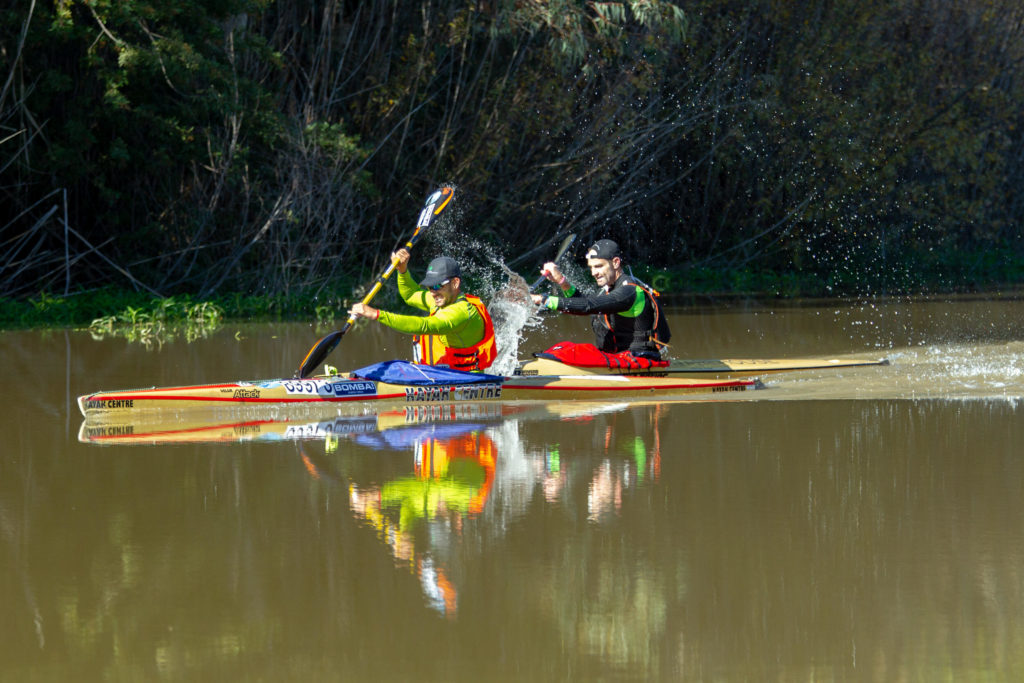 “There was very little visibility as well because of the heavy mist in the morning, and we got quite a big fright because we couldn’t see much ahead of us or behind us,” he said.

They didn’t bank on being caught by the chasing youngsters within the first half an hour, but Solomon kept his cool and marshalled his Hungarian partner calmly, sticking to their pre-race gameplan.

“They must have been going flatbox from the start to have caught us within five kilometres, and I knew they would pay for that later,” said Solomon.

“We had a very clear plan today, and we planned to make our break after the single file section through Katkop. We made sure I went in first and he was second, and when we came out of that section we just went,” he explained.

“Adrián (Boros) is such a clever paddler and a great tactician,” Solomon went on to say. “He doesn’t get flustered, and we both know what our jobs are on the team.”

Solomon and Boros tightened the thumbscrews on the flatwaters into the headwaters of Misverstand dam to open up a two and a half minute lead over the tiring Lovemore and Maher, with local stalwarts Simon Van Gysen and Paul Marias posting another solid stage to retain third place, ahead of Heinrich Schloms and Louw van Riet.

Behind them Czech Petr Mojžíšek and German Matthias Schmidt had a days racing they would rather forget, as a strong early charge led to a spate of small mistakes and a swim for Mojžíšek that cost them two places on the leaderboard.

Zach Preyser and Bartho Visser and the KZN combo of Alan Houston and Stewart Little both benefitted from their slip-ups to move up the overall ranking going into the long third stage, which is raced as a mass start, meaning that paddlers can bank their leads by staying comfortably in the front bunch.

The Capensis Change A LIfe team of Khumbulani Nzimande and Siyanda Gwamanda improved their overall position, as did Paarl speedsters Jermaine Pietersen and Luke Stowman.

The 75km third stage from Bridgetown on Misverstand dam to Zoutkloof gets under way at 7:30am