The pre-race favourite trio of Hank McGregor, Andy Birkett and Hamish Lovemore raced away on the 56km first stage of the 2021 Berg River Canoe Marathon to take control of the 60th anniversary edition of the famous four-day classic from Paarl to Velddrif.

After just over three and a half hours of fast paced racing on a full Berg river and paddling in sublime warm sunny winter conditions, it was eleven-times winner McGregor who timed his end-sprint to perfection to edge into the overnight lead just ahead of 2014 champ Birkett and 2019 team race winner Lovemore.

The trio had dominated stage from the Market Street bridge in Paarl and had shrugged off the attention of all the other elite stars in the seeded A batch expert Paarl local Luke Stowman, who excelled by staying with the vanguard group for the first thirty kilometers.

McGregor said that the day had produced uncompromising racing with numerous challenges from the trio that has been dubbed the “Three Musketeers”.

“It was pretty cut-throat,” said McGregor. “For the first two hours there was a big bunch when Wayne Jacobs and Alex Masina caught up and joined the four of us at the front.

“That’s tough because there is always someone on the second wave, which is taxing on the body,” added the Euro Steel star.

“We went through one or two three blocks and that whittled the bunch down to the three of us eventually.

“The pace was really fast right from the start, and with the stage being shorter that usual it encouraged people to up the pace more than normal.

Birkett said that the stage had been hard but fair.

“With guys like Hamish (Lovemore) and Hank (McGregor) you know you are going to get hard but fair racing,” said the East Londoner. 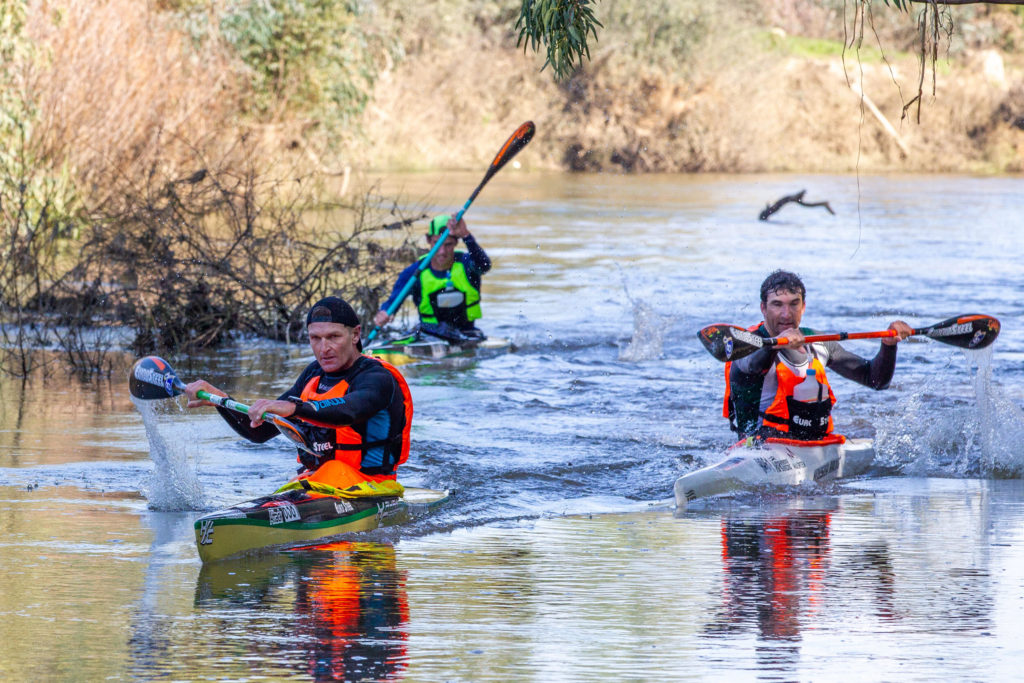 He said that his day had been inspired by the news that his former doubles partner Jean van der Westhuyzen had won a gold medal at the Olympic Games in Tokyo earlier in the day.

“It gave me goosebumps! I thought about him a lot while I was racing today,” said Birkett.

In perhaps the performance of the day Stowman soldiered on alone to wrap up fourth ahead of Masina, who surprised the race by entering late on Wednesday night.

The women’s race that has gripped the followers of the race, was turned on its head by a gutsy Day One charge by Andy Birkett’s wife Nikki, who paddled most of the day on her own to claim an overnight lead of over five minutes.

“My plan was to go as hard as I can today because it isn’t a very technical day,” said Birkett.

“I just put my head down and tried to work the bunches, but it got tough at the end because I was on my own for most of the day,” she added.

The second stage is longer than usual, 56 kilometres from the overnight at Delsma Farm to Bridgetown at the headwaters of Misverstand dam.